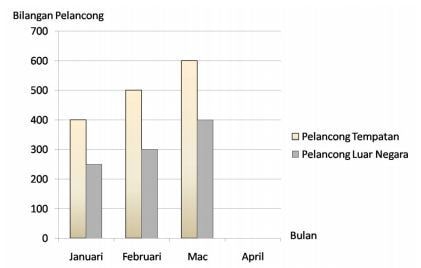 Read the following paragraphs to answer the next seven questions (Questions 1 – 7).

The total number of deaths and injuries due to road accidents increases year after year despite numerous campaigns held in order to curb the situation. Effects arising from road accidents include loss of life which results in loss of human resource to a certain extent. It also causes damage to property. The rise in the number of road accidents reflects on the safety of one of Malaysia’s main medium of transportation. This reflects the country’s image which in turn affects our tourism industry, an important source of our country’s gross income.

Human factors has always been the center of blame and fault when it comes to road accidents. Carelessness resulting from various factors including pressure, driving under the influence of drugs and alcohol, and also the act of doing something else like talking on a mobile phone or text messaging is often the cause. Another human factor which leads to accidents is the tendency to speed on the road. Whether it’s to get to a destination on time or to boast a car’s power and size, speeding is simply an act portraying the disregard of human life.

Another factor is the road condition themselves. Although access to expressways and interstate highways are present, traffic builds up easily, causing major congestions, especially during festive seasons. The overall quality of road systems in some parts of this country is still considered poor. As for the vehicles themselves, some are not properly inspected and regularly maintain. What’s worse, many car owners make excessive modifications not according to road safety rules and specifications. Furthermore the lack of road safety and traffic enforcement has always been another factor to blame.

Road safety should be improved by shaping the human factor at various levels, including road safety education at schools, driving school and learning centers, and also through the media campaigns. New laws and road safety regulations should be drafted and enforced. In addition, road transportation management should be researched and revised wherever necessary.

Upgrading of the current road systems and utilities should also be considered. This includes and overhead bridge for pedestrians, maintenance and calibration of traffic lights and also the repair and maintenance of damaged roads and improvement of old roads. To achieve this, the contractors involved in road construction, maintenance and repair must be monitored and accounted for.

Vehicles must undergo regular inspection, whether it’s a commercial truck, lorry or a private owner’s car. Such practices must be encouraged, especially before long travelling periods during the festive season for example. Commercial vehicles should go through periodic maintenance and servicing. To complement all that, enforcement of road safety and traffic regulations is a must.

As a conclusion, the awareness and cooperation of all parties is required in order to curb the problem of road accidents. This will help reduce road fatalities, unnecessary damage to property and helps portray Malaysians as civilized people responsible on the road.

3) Which following statement are TRUE?

4) According to the article what is the best solution to curb the problem of road accident?

5) How to upgrade current road system?

A. overhead bridge for pedestrians
B. maintenance and calibration of traffic lights
C. repair and maintenance of damaged roads
D. improve new roads

7) Although access to expressways and interstate highways are present, traffic builds up easily, causing ___________________ congestions.

Read the following paragraphs to answer the next three questions (Questions 8 – 10).

One of the modern world’s intriguing sources of mystery has been aeroplanes vanishing in mid-flight. One of the more famous of these was the disappearance in 1937 of a pioneer woman aviator, Amelia Earhart. On the second last stage of an attempted round the world flight, she had radioed her position as she and her navigator searched desperately for their destination, a tiny island in the Pacific.

The plane never arrived at Howland Island. Did it crash and sink after running out of fuel? It had been a long haul from New Guinea, a twenty hour flight covering some four thousand kilometres. Did Earhart have enough fuel to set down on some other island on her radioed course? Or did she end up somewhere else altogether? One fanciful theory had her being captured by the Japanese in the Marshall Islands and later executed as an American spy; another had her living out her days under an assumed name as a housewife in New Jersey.

Seventy years after Earhart’s disappearance, ‘myth busters’ continue to search for her. She was the best-known American woman pilot in the world. People were tracking her flight with great interest when, suddenly, she vanished into thin air. Aircraft had developed rapidly in sophistication after World War One, with the 1920s and 1930s marked by an aeronautical record-setting frenzy. Conquest of the air had become a global obsession. While Earhart was making headlines with her solo flights, other aviators like high-altitude pioneer Wiley Post and industrialist Howard Hughes were grabbing some glory of their own. But only Earhart, the reserved tomboy from Kansas who disappeared three weeks shy of her 40th birthday, still grips the public imagination. Her disappearance has been the subject of at least fifty books, countless magazine and newspaper articles, and TV documentaries. It is seen by journalists as the last great American mystery. There are currently two main theories about Amelia Earhart’s fate.

There were reports of distress calls from the Phoenix Islands made on Earhart’s radio frequency for days after she vanished. Some say the plane could have broadcast only if it were on land, not in the water. The Coast Guard and later the Navy, believing the distress calls were real, adjusted their searches, and newspapers at the time reported Earhart and her navigator were marooned on an island. No-one was able to trace the calls at the time, so whether Earhart was on land in the Phoenix Islands or there was a hoaxer in the Phoenix Islands using her radio remains a mystery. Others dismiss the radio calls as bogus and insist Earhart and her navigator ditched in the water. An Earhart researcher, Elgen Long, claims that Earhart’s airplane ran out of gas within fifty-two miles of the island and is sitting somewhere in a 6,000-square-mile area, at a depth of 17,000 feet. At that depth, the fuselage would still be in shiny, pristine condition if ever anyone were able to locate it. It would not even be covered in a layer of silt. Those who subscribe to this explanation claim that fuel calculations, radio calls and other considerations all show that the plane plunged into the sea somewhere off Howland Island.

Whatever the explanation, the prospect of finding the remains is unsettling to many. To recover skeletal remains or personal effects would be a grisly experience and an intrusion. They want to know where Amelia Earhart is, but that’s as far as they would like to go. As one investigator has put it, “I’m convinced that the mystery is part of what keeps us interested. In part, we remember her because she’s our favourite missing person.”

9) All the following are theories about Amelia’s fate EXCEPT

A. she crashed on a remote island somewhere near her destination.
B. her plane ran out of fuel and crashed into the sea.
C. she was captured by the Japanese and executed as a spy.
D. she escaped incognito and lived under an assumed name.
E. she crashed somewhere on Howland Island.